My first Adopt A Composer blog entry! I’m really looking forward to working on this project. Last weekend, I was able to meet the Jan Modelski Community Orchestra, who I’m working with, and get to know them – I think I chatted to about half the members of the orchestra, and they’re all really interested and keen to get to work. Today was just about getting ideas – up until now I’ve deliberately left my mind as a blank canvas where writing for JMCO is concerned, as I wanted to wait until I’d heard them play.

At the rehearsal, the group played through selections from The Sound Of Music, film music from E.T., and Sibelius’ “Finlandia” (where the sudden discovery of a trumpet part in F rather than Bb meant I had to do some speedy transposition for a trumpet player!) All sounded excellent.

Here I am with Jan Modelski and the orchestra:

The unusual thing about the JMCO is the balance of the orchestra. It’s not a conventional line-up, because anyone is welcome; while the full set of players is streamed into three sub-orchestras (beginners, intermediate, and the top group which I’m working with), there are no restrictions on how many players can be in each section, and it’s not entirely restricted to conventional instruments. As a result, there were (as I recall) 6 flutes, 4 clarinets, 3 oboes, no bassoons, a bass clarinet, a soprano sax, a tenor sax (and an alto sax who wasn’t there this weekend), two trombones, two horns, a trumpet and a tuba. Strings were rather fewer in comparison – 7-6-2-3-1 – and for the music this weekend, often had to play up quite a lot to balance the wind and brass. We also have timpani and drumkit, and hopefully soon a glockenspiel.

One of the oboe players also doubles on baritone – not a singing baritone, but the brass band instrument, which is basically to a euphonium as a cornet is to a trumpet (i.e. much straighter bore, and a different sound as a result). Unusually among composers, this is actually an instrument I’ve written for before (two friends at Hull asked me to write a duet for baritone and clarinet). For this rehearsal, she was playing a French horn part. (And the second trumpet part was being played on tenor sax.)

After the rehearsal, we drove back to Chester (with a brief excursion for a look at the venue for the concert – unfortunately it wasn’t open at the time, but it was handy to get an idea) and had a very late lunch at the cathedral, with Jan Modelski himself, and Roanne, Becky and Tony from the orchestra, to discuss plans and possibilities.

Many composers find constraints on their work to be a source of inspiration, and this sometimes works for me as well. As we don’t know exactly how many players will be available for the concert (there could be anything from 4 to 10 flutes, 3 to 7 clarinets, etc.) I’ll probably use something that I often do with choirs – give a section a short modal phrase (or possibly something more chromatic) and ask them to play it repeatedly, independently of each other. This creates a shifting modal background, or a kind of shimmery cluster chord, if done quietly, or something more cacophonous, like a crowd shouting chaotically, if played loudly and prominently.

We also established that the orchestra like melodies and recognisable harmonies – one reason why film music is so popular with them. I think I can do some of that :)

I had a feeling that the actual inspiration for the piece might come from the Roman history of the area. However, I think that my vague plans for a suite called “Ecce Romani” may end up waiting for another time – because the thing that I found most inspiring for a new piece was this little statue of an elephant, outside Chester Cathedral: 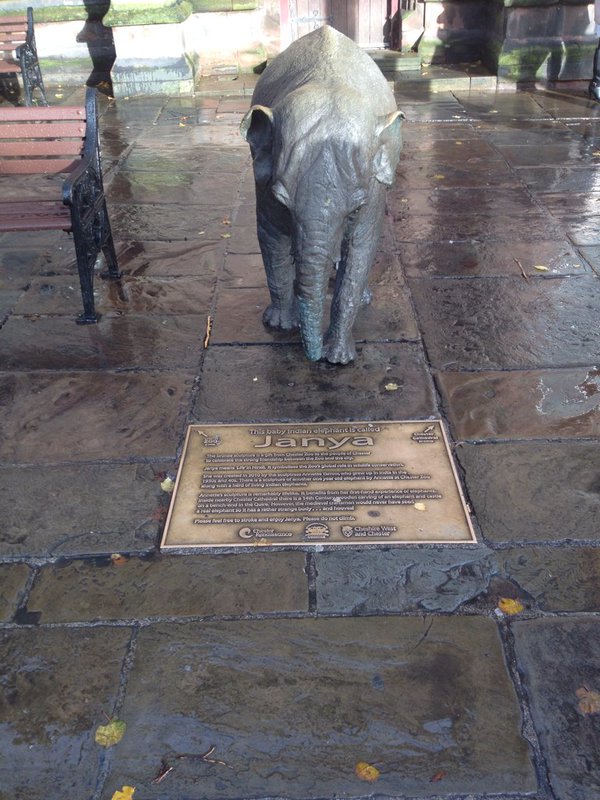 She’s called “Janya”, which is Hindi for “life”, and I think that’ll be an excellent working title. The sculptor, Annette Barrow, is still alive as far as I can tell, so if this ends up being the title of the piece I’ll invite her along.

Next steps: we’re meeting again on December 5th, and at that point I want to have some ideas to present to the orchestra and try out. I’ll probably have 4-6 passages of music (maybe up to 30 seconds long) orchestrated in a few different ways so I can find out how things blend.

This weekend, I’m off for a short residency in Crear with a string trio from Red Note Ensemble and a few other composers (with Enterprise Music Scotland) and that will hopefully help me put together some ideas for this piece.

Chris Hutchings is a composer based in Edinburgh; his works have been performed around the world and been broadcast on Radio 3 and Radio 4, and won several prizes.

Chris is passionate about social and environmental justice, and runs #ChoirsForClimate, providing resources and music to choirs who are passionate about the environment, and #ChoirsAgainstRacism, sharing anti-racism and social justice music and more. Most of the music on those sites is available under Creative Commons licenses.